A couple of water troughs alongside the Durham Road, between Rainton Bridge and East Rainton,  near Houghton-le-Spring, Tyne & Wear.

Spanish Sunday is an old name for Palm Sunday in the English Midland counties, and in parts of the West riding of Yorkshire.

It’s derived from a children’s custom that flourished there as recently as the first two decades of the 20th century, and of which traces may still remain in a few districts.

A sweet drink was made for the festival from broken pieces of Spanish liquorice, peppermint or lemon sweets, brown sugar, and well-water. The solid ingredients were put into glass bottles on the previous evening, and a little water was added to make a thick, rich sediment.

On Palm Sunday morning, the children went to some local holy or wishing-well, walked round it once (or in some places three times) and then filled the  bottles with its water. Almost every region had some particular spring  which was visited for this purpose, and to it children came from surrounding parishes in quite considerable numbers.

When the bottles were filled, they were vigorously shaken, and as soon as the sweet sediment was sufficiently dissolved to flavour the water, the ‘Spanish’ drink was ready to use.

For more on this subject, view the thread dedicated to it on the Holy Wells & Water Lore Forum –  here.

A roadside water trough, located in Forsyth Road, West Jesmond, Newcastle Upon Tyne,  a few yards from the junction with the Great North Road.

An Ordnance Survey bench mark – a horizontal line with an arrow pointing up from below – is carved into one end of the trough.

These marks were cut by Ordnance Survey levelling staff to provide a network of points at which height has been precisely measured (to the centre of the horizontal line) above sea level.

There used to be about half a million bench marks in Great Britain but they are not needed any more, due to satellite technology,  and about half have disappeared.

1702 – The Daily Courant, England’s first national daily newspaper was published for the first time, by Edward Mallet from his premises “against the Ditch at Fleet Bridge”.The paper lasted until 1735 when it was merged with the Daily Gazetteer.
It consisted of a single page with two columns. Mallet advertised that he intended to publish only foreign news and would not add any comments of his own, supposing other people to have “sense enough to make reflections for themselves.”   Ha, ha, ha ! 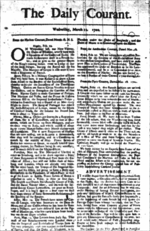 Originally erected to commemorate Victoria, it was renovated in 2012.

For more information and photos  regarding this fountain, plus others in North East England, visit this thread –  http://holywells.boardhost.com/viewtopic.php?id=78

Its topped by a carving of what I take to be an Eagle – something avian, anyway.

The water flowed from the four heads of some kind of cryptid – sort of looks like a  dog/lion hybrid.

More photos and information about this fountain (and others in North East England) at this thread – http://holywells.boardhost.com/viewtopic.php?id=78

Conjouring troublesome ghosts into bottles and consigning them to watery graves used to be a common practice. Is it ever done nowadays ?

Here’s an example from the Rev. Elias Owen…

This lady could not rest in her grave because of her misdeeds, and she troubled people dreadfully; at last she was persuaded or enticed to contract her dimensions, and enter into a bottle.

She did so, after appearing in a good many hideous forms; but when she got into the bottle, it was corked down securely, and the bottle was cast into the pool  underneath the Short Bridge, Llanidloes, and there the lady was to remain until the ivy that grew up the buttresses should overgrow the sides of the bridge, and reach the parapet.

The ivy was dangerously near the top of the bridge when the writer was a schoolboy, and often did he and his companions crop off its tendrils as they neared the prescribed limits for we were all terribly afraid to release the dreaded lady out of the bottle.

In the year 1848, the old bridge was blown up, and a new one built instead of it.  A schoolfellow, whom we called Ben, was playing by the aforesaid pool when the bridge was undergoing reconstruction, and he found by the river’s side a small bottle, and in the bottle was a little black thing, that was never quiet, but it kept bobbing up and down continually, just as if it wanted to get out.

Ben kept the bottle safely for a while, but ere long he was obliged to throw it into the river, for his relations and neighbours came to the conclusion that that was the very bottle that contained Lady Jeffrey’s Spirit, and they also surmised that the little black restless thing was nothing less than the lady herself.  Ben consequently resigned the bottle and its contents to the pool again, there to undergo a prolonged, but unjust, term of imprisonment.

Follow this thread on the Holy Wells & Water Lore Forum –

Unknown remains of a large creature have been found in Lake Labynkyr,Siberia,  say the first divers to ever reach its floor.

Using an underwater scanner they discovered a jaw and skeletal remains that might be the notorious ‘Devil’ that was first reported by locals in the 19th century – an unknown creature refered to as Russia’s Loch Ness Monster.

In the 1960s, there were accounts of ‘a monster with a long neck coming up out of the lake making an eerie sound’. Some versions say it was lizard-like.

The FitzGibbon monument in Lisnagry, Limerick, Republic of Ireland, which seems to incorporate a pump or drinking fountain, has become the focus for numerous offerings.

Toys, religious figurines and candles started appearing  at the foot of the monument in Richill, Lisnagry – on the Limerick side of the Castleconnell roundabout – a number of weeks ago.

Paddy Tuohy, of Castleconnell Historical Society, said the items were first placed in a water trough late last year so they couldn’t be seen from the road.

Toys, figurines, candles, musical instruments, a frame with no photo in it have now overflowed on to the base of the memorial. Mr Tuohy said many people are talking about the mystery in the locality.

“I’ve seen them myself. Nobody knows what the story is. In parts of Ireland there are locations called raggy trees but I don’t know of any in Limerick.

“They are trees over holy wells. Statues, holy picture, rags, cloths, belts, braces, false teeth etc are placed there. I know of one in Roscrea. It seems to me like the beginning of a kind of a raggy tree in Lisnagry,” said Mr Tuohy.

It is believed that those who place items at raggy trees are hoping for a cure. However, he says there is no religious significance attached to the FitzGibbon monument.

The first water drawn from any well, pond or stream (and by extension, I suppose, your kitchen tap) on New Year’s morning used to have special significance  and was known as the Flower of the Well or Cream of the Well, and obtaining it meant good luck in the coming year.

If it was  bottled and kept in the house, it was said never to lose its freshness and purity, and its very presence would protect the household from misfortune in the coming year.  Worth trying ? Bottle the first water drawn from your main water source on January 1st and keep it safe.

Full article and subsequent posts (including my own midnight visit to a well back int the 1980s) here – http://holywells.boardhost.com/viewtopic.php?id=81