1797 – Mary Wollstonecraft Shelley born. English novelist, short story writer, dramatist, essayist, biographer, and travel writer, best known for her Gothic novel Frankenstein: or, The Modern Prometheus (1818). She also edited and promoted the works of her husband, the Romantic poet  Percy Bysshe Shelley. Her father was the political philosopher William Godwin, and her mother was the philosopher and feminist Mary Wollstonecraft. 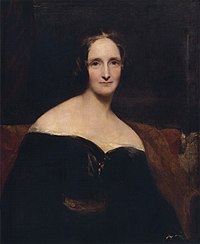 .
1812 – The Observer reported: “Mr. J. Toupin, while on a sailing expedition last week, with a party of ladies and gentlemen, about a mile from Exmouth Bay, discovered an animal resembling the description given of the Mermaid.

One of the boatmen threw it some pieces of boiled fish, which it ate with apparent relish. A medical gentleman offered a reward of 20 pounds…in consequence of which all the fishermen are busily preparing to ensnare it.”

1918 – London’s policemen went on strike against wages lower that those of unskilled workers, long hours, badly organized and unpaid overtime. Technically a mutiny, the action ended when concessions were granted.

Lloyd George was later to claim that Britain was “nearer to Bolshevism” that night than she was ever to be again.