Delia  Derbyshire ( 1937 –  2001) was an English musician and composer of electronic music and musique concrète. She is best known for her electronic realisation of Ron Grainer’s theme music for  Doctor Who and for her work with the BBC Radiophonic Workshop.

Of acting, Hunter said, “As long as the direc­tor told me where to stand and what to say, I was happy. Any­one who says there’s any more to it than that, is full of bullshit. … It’s a job. It is a craft, but there’s no art involved. What you need is com­mon sense and a rea­son­ably rough head. You put on the makeup and the wardrobe, and that is half the per­for­mance. That upsets the purists, but never mind, they don’t work as much as I do.” 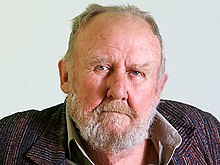 He was found dead from a heroin overdose, aged 25,  in his grandmother’s bathroom .

Her style was described as beguiling, apparently vulnerable and whimsical, but often waspish. She excelled at deadpan diatribes about everyday irritations.

She died as a consequence of ovarian cancer at the age of 48.