1778 – Joseph Grimaldi born. English actor, comedian and dancer, who became the most popular English entertainer of the Regency era. In the early 1800s, he expanded the role of Clown in the harlequinade that formed part of British pantomimes, notably at the Theatre Royal, Drury Lane and the Sadler’s Wells and Covent Garden theatres.

He became so dominant on the London comic stage that harlequinade Clowns became known as “Joey”, and both the nickname and Grimaldi’s whiteface make-up design were, and still are, used by other types of clowns. Grimaldi originated catchphrases such as “Here we are again!”, which continues to feature in modern pantomimes. 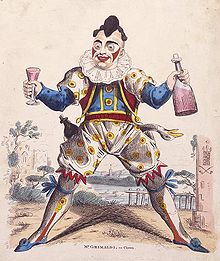 As editor of the controversial British science fiction magazine New Worlds, from May 1964 until March 1971 and then again from 1976 to 1996, Moorcock fostered the development of the science fiction “New Wave” in the UK and indirectly in the United States. His serialization of Norman Spinrad‘s Bug Jack Barron was notorious for causing British MPs to condemn in Parliament the Arts Council’s funding of the magazine.

As a musician, Plank is credited on albums by Guru Guru, Kraan, Cluster, Liliental and Os Mundi. He collaborated with Dieter Moebius on five Moebius & Plank studio albums recorded between 1979 and 1986. The Moebius & Plank sound foreshadowed techno and electronica and influenced many later musicians.