INTERPLANETARY CONFEDERATION DAY
To recognize the other planets with which Earth  shares the galaxy.

1066  – Battle of Hastings –  on Senlac Hill, seven miles from Hastings (although there have been other sites suggested), the Norman forces of William the Conqueror defeated the English army and  King Harold II of England was killed in the battle—legend has it that he was shot through the eye with an arrow. He was the last English king to die in battle on English soil until Richard III was killed at the Battle of Bosworth Field, and the battle marked the last successful foreign invasion of the British Isles. Although there was further English resistance, this battle is seen as the point at which William gained control of England, becoming its first Norman ruler as King William I. 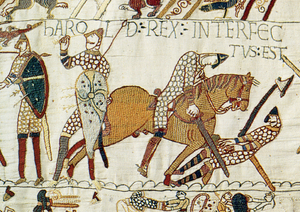 1656 – Massachusetts enacted the first punitive legislation against the Religious Society of Friends (Quakers). The marriage of church-and-state in Puritanism made them regard the Quakers as spiritually apostate and politically subversive.

1935 – La Monte Young born.  American avant-garde composer, musician, and artist,  generally recognized as the first minimalist composer. His works have been included among the most important and radical post-World War II avant-garde, experimental, and contemporary music. Young is especially known for his development of drone music. Both his proto-Fluxus and “minimal” compositions question the nature and definition of music and often stress elements of performance art.