1789 –  The Power of Sympathy or the Triumph of Nature Founded in Truth published by Isaiah Thomas in Boston. American sentimental novel written in epistolary form by William Hill Brown, and widely considered to be the first American novel.

The scandal was widely known, so most readers were able to quickly identify the “real” story behind the fiction: in every essential, Brown’s story is an indictment of Morton and an exoneration of Fanny Apthorp, with “Martin” and “Ophelia” representing Morton and Apthorp, respectively.

1793 – After being found guilty of treason by the French Convention, Louis XVI of France was executed by guillotine.

Some accounts of Louis’s beheading indicate that the blade did not sever his neck entirely the first time. There are also accounts of a blood-curdling scream issuing from Louis after the blade fell but this is unlikely, since the blade severed Louis’s spine. It is agreed that while Louis’s blood dripped to the ground many members of the crowd ran forward to dip their handkerchiefs in it. 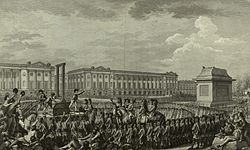 According to author Philip A. Lieberman, the Wolfman persona “derived from his love of horror flicks and his shenanigans as a ‘wolfman’ with his two young nephews. The ‘Jack’ was added as a part of the ‘hipster’ lingo of the 1950s, as in ‘take a page from my book, Jack,’ or the more popular, ‘hit the road, Jack.'”

In 1973, he appeared in director George Lucas‘ second feature film, American Graffiti, as himself. His broadcasts tie the film together, and Richard Dreyfuss’s character catches a glimpse of the mysterious Wolfman in a pivotal scene.

In gratitude for Wolfman Jack’s participation, Lucas gave him a fraction of a “point” — the division of the profits from a film — and the extreme financial success of American Graffiti provided him with a regular income for life.

1942 – Edwin Starr born.  American soul music singer,  most famous for his Norman Whitfield produced Motown singles of the 1970s, most notably the number one hit “War”.

1984 – Jackie Wilson died. American singer and performer. Known as “Mr. Excitement“, Wilson was important in the transition of rhythm and blues into soul. He was considered a master showman, one of the most dynamic and influential singers and performers in R&B and rock history.

Gaining fame in his early years as a member of the R&B vocal group Billy Ward and His Dominoes, he went solo in 1957 and recorded over 50 hit singles that spanned R&B, pop, soul, doo-wop and easy listening.

During a 1975 benefit concert, he collapsed on-stage from a heart attack and subsequently fell into a coma that persisted for nearly nine years until his death in 1984, aged 49.

1997 – Colonel Tom Parker died. Entertainment impresario best  known as the manager of Elvis Presley. Parker’s management of Presley defined the role of masterminding talent management, which involved every facet of his life and was seen as central to the astonishing success of Presley’s career.

“The Colonel” displayed a ruthless devotion to his client’s interests and took more than the traditional 10 percent of his earnings (reaching up to 50 percent by the end of Presley’s life).
Presley said of Parker: “I don’t think I’d have ever been very big if it wasn’t for him. He’s a very smart man.”

For many years Parker falsely claimed to have been U.S.-born, but it eventually emerged that he was born in Breda, Netherlands, real name Andreas Cornelis  van Kuijk.

991 – Battle of Maldon: an English force, led by Byrhtnoth, Ealdorman of Essex, were defeated by a band of inland-raiding Vikings near Maldon in Essex. One manuscript of the Anglo-Saxon Chronicle said a Norwegian, Olaf Tryggvason, led the Viking forces, estimated to have been between 2,000 and 4,000 fighting men. A source from the 12th century, Liber Eliensis, written by the monks at Ely, suggests that Byrhtnoth had only a few men to command: “he was neither shaken by the small number of his men, nor fearful of the multitude of the enemy”. Not all sources indicate such a disparity in numbers.

An account of the battle, embellished with many speeches attributed to the warriors and with other details, is related in an Old English poem which is usually named The Battle of Maldon.

1792 – French Revolutionaries imprisoned Louis XVI and the monarchy was suspended.

1842 – The Mines Act came into force in the UK, releasing all women and girls, as well as boys under the age of 10, from underground employment.

1948 – Montague Summers died.  English author and clergyman. He is known primarily for his scholarly work on the English drama of the 17th century, as well as for his idiosyncratic studies on witches, vampires, and werewolves, in all of which he professed to believe. He was responsible for the first English translation, published in 1928, of the notorious 15th-century witch hunter’s manual, the Malleus Maleficarum.

1961 – First use in Vietnam War of the Agent Orange by the U.S. Army.
Agent Orange was the code name for one of the herbicides and defoliants used by the U.S. military as part of its herbicidal warfare program, Operation Ranch Hand, during the Vietnam War from 1961 to 1971. Vietnam estimates 400,000 people were killed or maimed, and 500,000 children born with birth defects.

2008 – Isaac Hayes died.  American songwriter, musician, singer, actor, and voice actor. Hayes was one of the creative influences behind the southern soul music label Stax Records, where he served both as an in-house songwriter and as a record producer, teaming with his partner David Porter during the mid-1960s. During the late 1960s, he also began recording music and  had several successful soul albums such as Hot Buttered Soul (1969) and Black Moses (1971). In addition to his work in popular music, he worked as a composer of musical scores for motion pictures, probably best  known for his musical score for the film Shaft (1971).