His magnum opus was a sequence of short stories and novels collectively entitled La Comédie humaine, which presents a panorama of French life in the years after the 1815 fall of Napoleon Bonaparte.

Due to his keen observation of detail and unfiltered representation of society, Balzac is regarded as one of the founders of realism in European literature, and is renowned for his multifaceted, morally ambiguous characters.

1848 – Karl Marx and Friedrich Engels published The Communist Manifesto.  It has since been recognized as one of the world’s most influential political manuscripts.

Commissioned by the Communist League, it laid out the League’s purposes and program. It presents an analytical approach to the class struggle (historical and present) and the problems of capitalism, rather than a prediction of communism’s potential future forms. 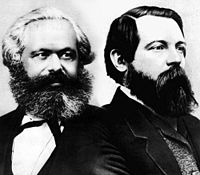 1965 – Malcolm X assassinated at the Audubon Ballroom in New York City by members of the Nation of Islam.  As he prepared to address the Organization of Afro-American Unity , a disturbance broke out in the 400-person audience—a man yelled, “Nigger! Get your hand outta my pocket!”

As Malcolm X and his bodyguards moved to quiet the disturbance, a man seated in the front row rushed forward and shot him once in the chest with a double-barreled sawed-off shotgun.  Two other men charged the stage and fired semi-automatic handguns, hitting Malcolm X several times.  He was pronounced dead at 3:30 pm, shortly after he arrived at Columbia Presbyterian Hospital.