1882 – Jesse James died.  American outlaw, gang leader, bank robber, train robber and murderer, and the most famous member of the James-Younger Gang. Already a celebrity when he was alive, he became a legendary figure of the Wild West after his death.

He was killed by Robert Ford,  a member of the gang living in the James house,  who was hoping to collect a state reward on James’ head. 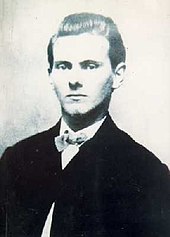 1949 – Richard Thompson born. British songwriter, guitarist and recording and performing musician. Highly regarded for his guitar techniques and strange, darkly-funny lyrics, Thompson’s music has been consistently lavished with praise by critics and by his peers throughout his long career.

He made his debut as a recording artist as a member of Fairport Convention in September 1967, and continues to write and record new material regularly and performs live frequently throughout the world.

He was a leading composer for the stage who was best known for his fruitful collaborations with Bertolt Brecht, with whom  he developed productions such as his best-known work The Threepenny Opera, a Marxist critique of capitalism, which included the ballad “Mack the Knife”.

1698 – In an effort to Westernize his nobility, Tsar Peter I of Russia imposed a tax on beards for all men except the clergy and peasantry.

1847 – Jesse James born. American outlaw, gang leader, bank robber, train robber, and murderer from the state of Missouri and the most famous member of the James-Younger Gang. Already a celebrity when he was alive, he became a legendary figure of the Wild West after his death.

1877 – Crazy Horse died. Native American war leader of the Oglala Lakota. He took up arms against the U.S. Federal government to fight against encroachments on the territories and way of life of the Lakota people, including leading a war party to victory at the Battle of the Little Bighorn in June 1876.
After surrendering to U.S. troops under General Crook in 1877, Crazy Horse was fatally wounded by a military guard while allegedly resisting imprisonment at Camp Robinson in present-day Nebraska.

1912 – John Cage born. American composer, music theorist, writer, and artist. A pioneer of indeterminacy in music, electroacoustic music, and non-standard use of musical instruments, he was one of the leading figures of the post-war avant-garde. Critics have lauded him as one of the most influential American composers of the 20th century. He was also instrumental in the development of modern dance, mostly through his association with choreographer Merce Cunningham.

356 BC – The Temple of Artemis in Ephesus, one of the Seven Wonders of the World, was destroyed by arson.

1865 – In the market square of Springfield, Missouri, Wild Bill Hickok shot and killed Davis Tutt in what is regarded as the first western showdown.

1873 – At Adair, Iowa, Jesse James and the James-Younger Gang pull off the first successful train robbery in the American Old West.

1973 – In the Lillehammer affair in Norway, Israeli Mossad agents killed a waiter whom they mistakenly thought had been  involved in the 1972 Munich Olympics Massacre.