1905 – Greta Garbo born.  Swedish film actress and an international star and icon during Hollywood’s silent and classic periods. Many of her films were sensational hits, and all but three of her twenty-four Hollywood films were profitable.

1911 – Brinsley Le Poer Trench born. Trench – who was also 8th Earl of Clancarty – was a firm believer in flying saucers, and in particular, the Hollow Earth theory, ideas he discussed in his book Secret of the Ages: UFOs from Inside the Earth. He also claimed that he could trace his descent from 63,000 BC, when beings from other planets had landed on Earth in spaceships.
Most humans, he said, were descended from these aliens: “This accounts for all the different colour skins we’ve got here,” he said in 1981. A few of these early aliens did not come from space, he explained, but emerged through tunnels from a civilisation which “still existed beneath the Earth’s crust.” There were seven or eight of these tunnels altogether, one at the North Pole, another at the South Pole, and others in such places as Tibet. “I haven’t been down there myself,” he said, “but from what I gather [these beings] are very advanced.”

1939 – The Nazi propaganda broadcaster known as Lord Haw-Haw began transmitting. It was the nickname of several announcers on the English-language propaganda radio programme Germany Calling, broadcast by Nazi German radio to audiences in Great Britain on the medium wave station Reichssender Hamburg and by shortwave to the United States, though it later came to be exclusively applied to   William Joyce, who was German radio’s most prominent English-language speaker.

1964 – Sean O’Casey died.  Irish dramatist and memoirist. A committed socialist, he was the first Irish playwright of note to write about the Dublin working classes. 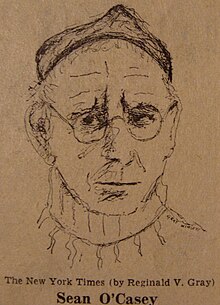 1970 – Jimi Hendrix died.  American musician and singer-songwriter. Widely considered to be the greatest electric guitarist in music history and one of the most influential musicians of his era despite his mainstream exposure being limited to four years.

Faster Pusycat Kill ! Kill ! is one of my all-time favorite films.