His magnum opus, Don Quixote, considered to be the first modern European novel,  is a classic of Western literature, and is regarded amongst the best works of fiction ever written.

His influence on the Spanish language has been so great that the language is often called la lengua de Cervantes (“the language of Cervantes“).

Yet Mingus avoided categorization, forging his own brand of music that fused tradition with unique and unexplored realms of jazz.

1923 – Bettie Page born.  American model who became famous in the 1950s for her pin-up photos. Often referred to as the “Queen of Pinups“, her jet black hair, blue eyes, and trademark bangs have influenced artists for generations.

Page was “Miss January 1955“, one of the earliest Playmates of the Month for Playboy magazine. “I think that she was a remarkable lady, an iconic figure in pop culture who influenced sexuality, taste in fashion, someone who had a tremendous impact on our society,” Playboy founder Hugh Hefner told the Associated Press.

From 1952 through 1957, she posed for photographer Irving Klaw for mail-order photographs with pin-up, bondage or sadomasochistic themes, making her the first famous bondage model. 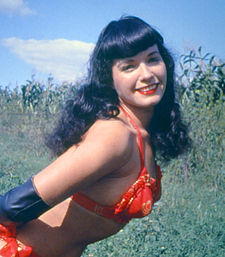 She later denounced her pornography career and became a spokeswoman for the anti-pornography movement.