1887 – Edith Sitwell born.  British poet and critic, eldest of the three literary Sitwells. She was most interested by the distinction between poetry and music, a matter explored in Façade (1922), which was set to music by William Walton, a series of abstract poems the rhythms of which counterparted those of music. Façade was performed behind a curtain with a hole in the mouth of a painted face (the painting was by John Piper) and the words were recited through the hole with the aid of a Sengerphone. The public received the first performance with bemusement, but there were many positive reactions.

1936 – The last known  Thylacine  (AKA Tasmanian Wolf or Tasmanian Tiger),  died  at  Hobart Zoo, Tasmania. It may or may not be extinct – the Australian Rare Fauna Research Association reports having 3,800 sightings on file from mainland Australia since  1936,  while the Mystery Animal Research Centre of Australia recorded 138 up to 1998, and the Department of Conservation and Land Management recorded 65 in Western Australia over the same period.  Independent thylacine researchers Buck and Joan Emburg of Tasmania report 360 Tasmanian and 269 mainland post-extinction 20th-century sightings, figures compiled from a number of sources. On the mainland, sightings are most frequently reported in Southern Victoria. 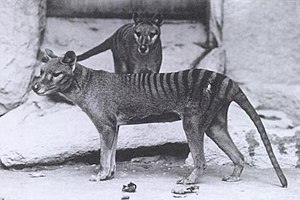 .
National Threatened Species Day has been held annually since 1996 on 7 September in Australia, to commemorate the death of the last officially recorded Thylacine.

2003 – Warren Zevon died. American rock singer-songwriter and musician noted for including his sometimes sardonic opinions of life in his musical lyrics, composing songs that were sometimes humorous and often had political or historical themes. Or about Werewolves in London…