1100 – William Rufus [William II, second Norman king of England]  killed  while hunting in the New Forest, by an arrow through the lung, but the circumstances remain unclear. The arrow was alledgedly shot by a nobleman named Walter Tirel,  although the description of events was later embroidered with more information,  the earliest statement of the event was in the Anglo-Saxon Chronicle, which only  noted that the king was “shot by an arrow by one of his own men”.

Later chroniclers added the name of the alledged killer  and a number of other details which may or may not be true.The first mention of any location more exact than the New Forest comes from John Leland writing in 1530 who stated that the king died at Thorougham a placename which has since fallen into disuse but was probably located at what is now Park Farm on the Beaulieu estates.

1865 – Alice’s Adventures In Wonderland by Lewis Carroll first published – then quickly withdrawn due to bad printing. Only 21 copies of this first edition known to survive.

1876 – Wild Bill Hickok died while  playing poker at Nuttal & Mann’s Saloon No. 10 in Deadwood, in the Black Hills, Dakota Territory. He  usually sat with his back to a wall, but the only seat available when he joined the poker game that night was a chair that put his back to a door. Twice he asked another player, Charles Rich, to change seats with him, and on both occasions Rich refused.

A former buffalo hunter named John McCall (better known as “Jack” or “Broken Nose Jack” McCall) walked in unnoticed. McCall walked to within a few feet of Hickok, drew a pistol and shouted, “Take that!” before firing at Hickok.McCall’s bullet hit Hickok in the back of the head, killing him instantly. The bullet emerged through Hickok’s right cheek, striking a  Captain Massie in the left wrist.

When shot, Hickock was holding a pair of aces and a pair of eights, all black. The fifth card’s identity is debated, or perhaps it  had been discarded and its replacement had not yet been dealt. 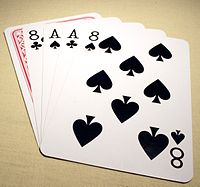 1997 – William S. Burroughs died. American novelist, short story writer, essayist and spoken word performer. A primary figure of the Beat Generation and a major postmodernist author, he is considered to be one of the most politically trenchant, culturally influential, and innovative artists of the 20th century. His influence is considered to have affected a range of popular culture as well as literature. Burroughs wrote 18 novels and novellas, six collections of short stories and four collections of essays. Five books have been published of his interviews and correspondences. He also collaborated on projects and recordings with numerous performers and musicians, and made many appearances in films.