1924 – Franz Kafka died. German-language writer of novels and short stories, regarded by critics as one of the most influential authors of the 20th century.

Kafka strongly influenced genres such as existentialism. His works, such as Die Verwandlung (The Metamorphosis), Der Process (The Trial), and Das Schloss (The Castle), are filled with the themes and archetypes of alienation, physical and psychological brutality, parent–child conflict, characters on a terrifying quest, and mystical transformations. 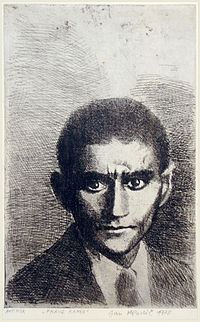 .
1926 – Allen Ginsberg born. American poet and one of the leading figures of the Beat Generation in the 1950s.

He vigorously opposed militarism, economic materialism and sexual repression. Ginsberg is best known for his epic poem “Howl“, in which he denounced what he saw as the destructive forces of capitalism and conformity in the United States.

Ginsberg took part in decades of non-violent political protest against everything from the Vietnam War to the War on Drugs. His poem “September on Jessore Road“, calling attention to the plight of Bangladeshi refugees, exemplifies what the literary critic Helen Vendler described as Ginsberg’s tireless persistence in protesting against “imperial politics, and persecution of the powerless.”

He is best known for his anthemic music with The Impressions during the Civil Rights Movement of the 1960s and for composing the soundtrack to the blaxploitation film Super Fly, Mayfield is highly regarded as a pioneer of funk and of politically conscious African-American music.

He was also a multi-instrumentalist who played the guitar, bass, piano, saxophone, and drums.

The Ides of March.

Lovecraft’s guiding aesthetic and philosophical principle was what he termed “cosmicism” or “cosmic horror“, the idea that life is incomprehensible to human minds and that the universe is fundamentally inimical to the interests of humankind.

As such, his stories express a profound indifference to human beliefs and affairs. Lovecraft is the originator of the Cthulhu Mythos story cycle and the Necronomicon, a fictional magical textbook of rites and forbidden lore.

1943 – Sly Stone born. American musician, songwriter, and record producer, most famous for his role as frontman for Sly and the Family Stone, a band which played a critical role in the development of soul, funk and psychedelia in the 1960s and 1970s.

He was one of the most influential performers and innovators in reggae music. “His abilities, technical expertise, and unique vocal delivery combined to create a unique sound that tells the listener emphatically that it is the ‘Dread at the Controls’.”