1748 – Jeremy Bentham born. British philosopher, jurist, and social reformer. He is regarded as the founder of modern utilitarianism.

Bentham became a leading theorist in Anglo-American philosophy of law, and a political radical whose ideas influenced the development of welfarism. He advocated individual and economic freedom, the separation of church and state, freedom of expression, equal rights for women, the right to divorce, and the decriminalising of homosexual acts. 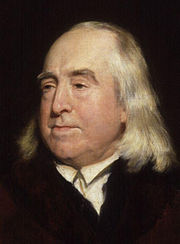