Campaign Badges of Sheffield, UK, have a number of topical badges available, including this one. They’ll also make badges to your design. Worth checking out.

Despite what the mainstream media would have us believe, the whole country is not currently indulging in a paroxym of royalty worship. The fact that our glorious monarch has notched up 60 years of unelected privilige may have some dancing in the streets, but for many others it varies from being an irritation to an insult to our intelligences.

Unemployment rising, services being cut, a bunch of politicians who seem to be doing their best to make bad times worse… and we’re being encouraged to hold street parties – at our own expense, its not as though she’s paying for the beer or anything – to celebrate one of the world’s richest woman’s clinging to an unelected office. What’s wrong with this picture ?

But its not all bad news. Although you wont see it mentioned in the mainstream media, there’s a healthy underground swell of anti-monarchist feeling that breaks through in creative outpourings. It was particularly noticeable at last year’s royal wedding, googling “fuck the royal wedding” threw up a wide variety of Youtube protests, from the satirical to the outraged.

It looks like the Jubilee overkill is going to achieve similar results, and I hope to introduce a few of them here. Cherish them, they’re true rages against the royal machine. Let’s start with a prime example…. 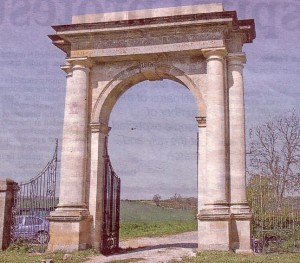 I’ve not visited this one, but its been in the news recently –

A 206-YEAR-OLD stone arch built to commemorate one of Britain’s great naval victories is standing proud again after a painstaking restoration project.

Nelson Gate, next to the A170 on the outskirts of Helmsley and originally an entrance to the Duncombe Park estate, is believed to be one of the earliest monuments to Lord Nelson and the Battle of Trafalgar.

A 2011 survey found parts of its stonework had severely decayed. The end of the resulting restoration scheme was marked yesterday with a ribbon-cutting ceremony attended by organisations which funded the project, including the Country Houses Foundation, the War Memorials Trust, the Yorkshire Gardens Trust and the North York Moors National Park Authority.

Nelson Gate has been a Grade II listed building since 1955, and can be found-

The official description is –

Inscribed frieze; to front: ‘To the memory
of Lord Viscount Nelson and the unparalleled gallant achievements of the
British navy’.

Its not mentioned in Gwyn Headley & Wim Meulenkamp’s   Follies – A Guide To Rogue Architecture [1986],  though Dunscombe Park is – apparently it also boasts Ionic and Tuscan Temple follies – although to be honest, their research seems to get sketchier the further they get from London.

i2sm creates music – or more properly sound – from images via the medium of MIDI instrument voices. You load your photo, painting, etc, choose a starting point, and go. The programme spirals out from the starting point and each colour it encounters en route produces a musical note. Well, in a nutshell…

What you often get, of course, is a mad assemblege of sqwarks and whistles, but within that some rather neat little riffs and tunes appear.  You can save the piece and later edit out the good bits and use them as samples to build a piece of music.

The idea behind Spirit Of Place was to take photos at a few favorite local spots here in North East England and use i2sm to generate pieces of music which perhaps might capture some of the spirit of the place.In most cases we also recorded background sound at the locations. Often its so far back in the mix as to not be obvious – but its there, linking us with a certain place in time and space.

Anyone who has used MIDI sounds will be aware that some are better than others. As a result of experimenting, we’ve found the ones that work best for us are ones like piano, viola, contrabass, xylophone, strings… as a result the pieces tend to sound like something which might best be described as experimental modern classical.

We then decided to try to make videos of each place.

The first of these pieces was generated from a photo of Man Haven Bay, on the South Tyneside coastline, between South Shields and Sunderland. This piece predates the idea of Spirit Of Place, in fact was the genesis of it.

Eventually there will be an album and maybe a DVD too – for more info, visit the Malice In Sunderland website [link in the sidebar >>>].

This is a video of a visit I made on Leap Year Day – 29th February 2012 – to the Apollo Pavilion, a famous/infamous structure – not sure whether or not it qualifies as a sculpture – in Peterlee, County Durham, UK.

Named after the first manned mission to the moon in 1969 – the year the structure was built – the Apollo Pavilion is an iconic example of 1960s public art.

The stucture was designed by the artist Victor Pasmore and marked the culmination of his work as consulting director of urban design with Peterlee development corporation. The Pavilion has undergone major restoration in 2009.

Its had a lot of detractors over the years, but I have to admit I quite like it. It probably helped that  I visited on a sunny day, the shadows cast by the various projecting bits of concrete added an extra depth, as did the sunlight reflecting off of the water of the lake. A visit on an overcast day might be a different proposition altogether.

Peterlee is a post-war new town, founded in 1948, and was  named after someone called, yes – Peter Lee (1864–1935), a  celebrated Durham miners’ leader, county councillor and Methodist local preacher.

A version – more a deconstruction / reworking than a cover version – of the Sex Pistols 1977 classic God Save the Queen.

It was recorded for a jubilee-themed competition on the mp3unsigned.com website.

Frankenstein Sound Lab support the abolition of the monarchy, allowing us to become citizens of a modern state, rather than subjects of an outmoded and discredited hereditary freakshow.

Workmen converting a building in Castlegate, Knareborough, North Yorkshire, into a restaurant have uncovered a mummified Cat in “a purpose-built tomb next to the fireplace” [how they knew that it was purpose-built is not stated.]

The building itself is said to date from as early as 1450.

The owner said that they had considered putting the cat back in the wall but because the works weren’t going to be finished for seven to eight weeks they decided to give it a decent burial nearby – a course of action I hope they wont come to regret. These creatures were there for a reason, and removing them without deactivating them first sometimes results in things happening.

If it had been me, I’d have put it back in its hole, along with some kind of offering as an apology for disturbing it.

Actually, its interesting to note how many times building work seems to activate supernatural activity. I’ve always supposed it to work on the same principle as a pond where all the silt has settled – the building work acts in the same way as someone coming along with a big stick and stirring everything up. Bits and pieces that have long lain dormant on the bottom are brought to the surface, activated, and things happen.

In time, the silt will settle again and things will stop happening.

This has always seemed a reasonable working hypothesis, but I wonder if in some cases activity is triggered because renovation work has inadvertently removed some protective talisman – be it a mummified Cat or something less obvious.

The practice of secreting mummified Cats in buildings seems to have been quite widespread at one time. As far as I know [and I’m willing to be corrected on this point] no-one ever wrote down any instructions or rituals regarding the practice, but it’s not difficult to imagine how it may have originated.

In times when houses were far more vermin-ridden than today, a good Cat would have been invaluable. When a noted mouser died, it could have been buried under the hearth or wherever, in the hope that it would continue to exert rodent control measures from the spirit world.

In time they came to represent luck and protection in a more general sense.

UK local election time again yesterday… I don’t know about where you live, but in this city it was hardly a maelstrom of excitement and enthusiasm. And I’m not talking about the voter apathy here, but candidate apathy.

I can remember a time not so long ago when a local council election meant you could barely open your front door for all the leaflets extolling the virtues of the various  hopeful Toms Dicks and Harrys.

Posters supporting the candidate of choice adorned many windows, and you could barely sit down to eat you dinner without a supporter – or even the candidate themselves – knocking on your door as you took the first mouthful. There were even political meetings where you could go and heckle them.

You may not have liked any of the candidates, but at least you damn well knew who they were.

Those days, it seems, are gone.  This year I didn’t see a single poster in a window – not just in my ward but during my travels around the city. Every dinner was eaten uninterrupted by political hopefuls.  Meetings do not happen anymore. And as for the leaflets…

Four candidates standing in my ward… one leaflet received – take a bow the Green Party candidate, who got my vote, though not just because he sent me a leaflet but more because his competitors represented the dreaded T.H.E.M. [Three Headed Electoral Monster, otherwise that triumvirate of ugly sisters known as Conservative, Labour and Liberal].

But to be honest, even the leaflet I did receive was pretty poor. Do they have to be so boring ? Dont politicians have any imagination ? Actually, on this last point, yes they do have imagination, as any perusal of their expenses claims will testify. But somehow it never seems to be applied to their literature.

I think one day I may have to stand as an independent candidate, if only to improve the standard of leafleting. I’m doing this off the top of my head, no doubt it could do with a little polish, but how would you feel about picking up another damn political leaflet off of the doormat and finding it started:

He stood in the shadows, regarding the city spread out below him with a jaundiced eye. A seething mass of vice, corruption, inequality and  [insert a local issue here – parking problems in the High Street or something…].

It would require a strong man to clean up this civic cess-pit. A man of integrity, a man of impeccable moral rectitude. Such men were rare, but had not the Gods themselves forged him for just such a purpose ?

And I could maybe knock up some kind of super-hero costume for when I go round knocking on doors – who was that masked man ? And hold political rallies backed by a rock band.

Would you vote for me ?